Fierce clanking rattled the steel walls of our family’s stateroom so badly that I felt certain the ship must be sinking. I peered out from under my covers to see if anyone else was panicking, but all seemed to be asleep. I nudged my sister next to me on our bunk.

Jean groaned. If her eyes had been open, I could tell she would have been rolling them. “We’re dropping anchor. We’re in Honolulu. Go back to sleep.”

Eventually the clanking of the anchor chain stopped and, trusting my big sister since we seemed to be still afloat, I managed to fall back asleep.

We had just crossed the Pacific from San Francisco on the more modest of the two ships that took passengers from the U.S. mainland to the territory of Hawai`i. The SS Lelani had carried troops during WWII, but now had been converted into a seven-hundred passenger ‘luxury liner’. The Matson Line’s Lurline was even more ‘luxurious’, but we loved our ship and had fun crossing the ocean. The crew made certain we had lots to do: we’d learned a bit of the Hawaiian language; we could now strum ukuleles; and my sister, Mom, and I could dance hula to “Little Grass Shack” and “Hukilau”. Captain Sven (who, mother whispered to us, she thought was very handsome) even had us eat dinner with him at his table. Only the pool had disappointed me; the ship rocked so much that water would slosh out, so they only filled it half-way. Being in it was more like surfing than swimming.

In the morning Jean and I were too excited to eat much breakfast. Running up to the railings on deck, we felt as if we’d sailed into an enchanted world. Jagged tropical mountains rose above the palm trees that lined the shores. Honolulu shone as the sun reflected off its new ten-story ‘sky-scrapers’. Brown-skinned men in loincloths paddled outrigger canoes through the breakers, coming to greet us. Young boys dove from the long canoes into the turquoise Hawaiian waters for coins the ship’s passengers tossed over the railings. Even at thirteen, I thought the men holding the canoe paddles were absolutely gorgeous. They chanted something to us in Hawaiian, and the ship’s entertainment director told us that, traditionally, we should be chanting a request to land. Unfortunately, he didn’t know, or wasn’t able to teach us, the proper words. Nevertheless, the SS Lelani weighed anchor and proceeded to the pier.

Making our way down the gangplank after the ship finally docked, we were greeted over and over by Hawaiians kissing our cheeks and placing leis over our heads. I had never smelled the beautiful white plumeria flowers before, but I now stood beside the grey warehouses of the Honolulu docks buried up to my eyeballs in them. Thirteen leis in all—nine plumeria and four made of purple orchids. Along the docks men were selling them, calling out, “Okid leis, fo’ fa dolla’!”

Jean and I helped lug our green and white plaid suitcases out to the cab that drove us to the Reef Hotel where we’d be staying way up on the seventh floor! The hotel was a block or so behind the big pink Royal Hawaiian Hotel that dominated Waikiki Beach, dwarfed only by the magnificence of Diamond Head, the iconic volcanic mountain of Honolulu. Our room had sliding glass doors that opened all the way onto what we were told to call a ‘lanai’, not a porch. The floor had woven ‘tatami mats’. When we left the doors pulled back, little striped doves walked inside onto the mats, much to our delight.

Without air conditioning in 1957, the doors to the lobby were left open to the trade winds that carried the scent of rain and flowers. Dad asked the desk clerk where we could find breakfast, since none of us had eaten much. Following his directions, we walked to the corner of Kalakaua Avenue and Lewers Road. Entering Stewart’s Pharmacy, we could smell the toasted orange bread that the desk clerk had recommended we try. Finding seats at the counter, we soon were licking our sticky fingers to get every last drop of the coconut syrup that we dribbled over the soft but crispy bread slices. Stewart’s Pharmacy became our breakfast choice for the rest of the time we stayed on O`ahu. Before we left that morning, my father, who loved to bake, begged the recipe for their bread so he would be able to recreate it after we returned home.

We all had noticed that no one in Honolulu dressed in the restrictive clothing favored on the U.S. mainland in the 1950’s, so we set out in quest of mu`umu`us for us females and an aloha shirt for dad. Jean and Mom soon doffed their bras and girdles (I was too young to require such armament) and the three of us left the store with nothing on but panties and floor-length mu`umu`us. Deliciously cooling air freely circulated around our nearly naked bodies under the cotton cloth, and I thought Dad looked handsome in his blue aloha shirt.

Few cars passed along the streets of Honolulu as we made our way to the new Hawaiian Village Hotel. Pathways in the hotel gardens led around lagoons where huge koi swam in rafts of orange and white. Pink flamingos dotted the shallowest areas. The hula dancers in the show we sat down to watch melded with the swaying palms and tropical plants behind them. None of the women wore the grass skirts or coconut shell bras that I’d seen in posters and cartoons of Hawai`i. The most beautiful dancers, many of whom were older than I’d expected, wore mu`umu`us with scarves tied around their hips to accentuate the motion. The fluid movements of hands and hips mesmerized me.

That evening we were treated to a luau that the Hawaiian Steamship Company had organized for its passengers. We sat on the grass before a long line of mats that were soon covered with plates of food. Banana leaves and a large pig were dug out of a nearby imu, an underground oven. The huge roasted pig rested on sticks that two men carried over to our feast. I felt slightly squeamish looking at the corpse as it passed by, but luckily the meat was pulled from the bones somewhere down the line, so only plates of succulent shredded pork made their way to our end of the mats. Slices of fresh pineapple, mango, papaya, and oranges filled plates between roasted purple sweet potatoes, fish dishes, and pots of poi. A young Hawaiian man showed us how to dip two fingers into the poi and then lick off the pounded taro. “Mmmm,” he smiled.

When I tried it, my response didn’t match his. Library paste, I thought.

The man told us that our white bread tasted as boring to him as poi did to us. “It’s all what you get used to,” he pointed out.

My favorite new dish was long rice—thin noodles of sweet rice flavor, soft and delicious. The luau ended with coconut pudding and damp cloths for wiping our fingers; silverware
had not been provided.

Our week in O`ahu ended with a spectacular sunset over the Pacific, framed in palm trees and smelling of white ginger. In the morning we were on our way to Kaua`i, the Garden Island, where new adventures awaited.

Although more than sixty years have passed since I first felt the magic of the islands, rainbows and the lilting music of Hawai`i continue to enchant me. Breezes still whispered, “Aloha, e komo mai,” whenever I returned, and now, at last, I am able to call paradise my home. 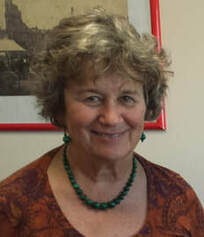 ​CAROL MCMILLAN is compelled to write by her unrelenting and incorrigible muse. She has been published in academic journals, several anthologies, and is the author of one book, White Water, Red Walls. She is currently working on a memoir of her experiences during the 1960’s in the San Francisco Bay Area.
Return to Latitudes