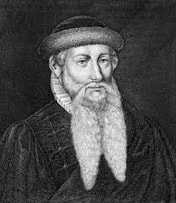 Johannes Gutenberg, inventor of the printing press, is with his lover, Konrad Humery, in a men’s club in Mainz in 1455 awaiting the outcome of a hearing in which his creditor is asking the court for permission to seize Gutenberg’s printing equipment and take over his business. While he waits for news of the outcome, Gutenberg drinks. Humery has urged Gutenberg to eat something, but Gutenberg has refused. Humery has nevertheless quietly asked the waiter to bring Gutenberg some nourishment. At rise, Gutenberg sits at a table, Humery stands beside him.


​GUTENBERG: The secret of the new method of writing almost got out once before, Kon, while I was living in Strasbourg. Years before you and I met.

(Gutenberg looks up at Humery, reaches for his hand.)

Please, stay with me and let me tell you the story. I want you to know.

(After a moment, Humery sits. Gutenberg takes a deep breath and a long drink and begins.)

The art and adventure –so I called it then –got its start during those years in Strasbourg. The idea for this new form of writing was in the air like the promise of Spring then. Rascals sniffed like hounds for any trace of it. Secrecy was a necessity. I experimented alone for a while, but I needed more money. I found a few others who wanted to know my secrets and were willing to pay for the privilege. We formed a society. They each agreed to contribute 500 gulden and keep the knowledge I gave them secret. One of them was a fellow by the name of Andreas Dritzehn. A good man, but the most unfortunate soul I ever met. He mortgaged his paternal inheritance to get in, but he still owed me 85 gulden when he died -- on the second day of Christmas, St. Stephen’s Day, 1438.  Of the Black Death.

(Gutenberg pauses, drains his goblet and refills it.)

It spread from Constantinople that year, through Venice, into the Valley of the Upper Rhine and right into Andreas Dritzehn’s body.

We’d shared the equipment out among us so if an outsider came across something in one of our rooms, he wouldn’t understand what he was looking at. Andreas was the keeper of the press. When he died, there were four pages of type locked into that press. That would have been – pardon the expression –a dead giveaway. Someone had to get those types out of there fast or our secret would be discovered.

I had a key to his rooms. I wrapped a scarf around my mouth and nose, whether as disguise or protection against the plague, I hardly knew. His body was still there. I crept past it, trying not to breathe, but the smell of death turned my stomach. I can smell it even now.

(Humery reaches to comfort Gutenberg, but Gutenberg stops him.)

Please –just listen. By the time I left, the types were gone. The press looked like an ordinary wine press. But as I was leaving, I stole a glimpse at Andreas. His face was frozen in a grimace – like a gargoyle. He must have died in agony. That image of his face like a frozen scream burned into me. I was shaken to my core, both by his death and by how close we’d come to having our secret discovered. When I got home, I melted the types down. It nearly broke me, watching each perfectly crafted letter dissolve in that hellish stew of red-hot liquid metal.

(Gutenberg drains his goblet, refills it.)

That was seventeen years ago. We had to start all over. But it was better than letting the secret get out. Now, just as we have shown the world the first flower of our new art by printing the Book of Books—the Bible itself—now comes this money-lender Fust and his conniving son to snatch this new art for themselves. Fust has waited for just this moment, when all my money is invested, to demand repayment of his loan. And Peter, his son, calling me “master” and blinding me with flattery these five years past, has inveigled from me all the secrets I once guarded so carefully.

What an old fool I’ve become!

What is this? Take it away! What—only goulash? Good Christ! I thought—just for a moment—I thought it was my life’s work dissolving into that cauldron of red-hot molten metal!

Oh, Konnie! What will become of me?​
​Author's Note:

​"Gutenberg's Monologue" is a modified version of the final scene in Act One of my full-length play, Gutenberg's Secrets. Andreas Dritzehn's death of the Black Plague on St. Stephen's Day in 1438, recovering the type from the printing press, melting it down and starting all over actually occurred. My picture in front of the Gutenberg Museum in Mainz, Germany, was taken in October 2019. Visiting the museum was the fulfillment of a long-held desire.