​The Third Edition of Latitudes is Out!
Let Us Give Thanks!

The moment comes but once a year. That moment when, after months of writing, of bravely submitting, of reading and choosing, of editing and formatting, the fruits of many persons’ labors are placed before us for our reading pleasure—the moment when Latitudes, the Guild’s own online literary review is finally published.

That moment arrived this year on February 26, a few short days before the deadline for our second issue of Member News. Suddenly there were more than two dozen members of Hawaii Writers Guild to be added to those who had earned the right to be recognized as Recently Published and receive our hearty “Congrats!” We recognize them here.

Those members gifted their readers with more than three dozen works of fiction, nonfiction, poetry and drama chosen for inclusion in the newest edition of Latitudes, which means that many members had more than one of their submissions selected. Some of these especially productive members had multiple works chosen in one genre; while others crossed genres, sometimes winning recognition in fiction, nonfiction and poetry.

These multi-talented writers include:

Members with a single work of fiction include:
​
--Donna Beumler: “Women’s Night Out”;
--Steven Foster: “Escape to Tiki Cove”; and
--Wendy Wilson: “Firewall”.

Members with a single work of nonfiction include:

--James Brooks: “The Purpose of a Garden”;
--Joy Fisher: “Tatters of Clearness through the Fog”;
--Virginia Fortner: “At Either End or Above the Middle”;
--Jim Gibbons: “Dogtuse”;
--Donna Maltz: “If a Virus Could Talk;
--Wendy Noritake: “Taking Flight”; and
--Diann Wilson: “Goodbye Big City. Hello Big Island”.

There were 11 members on the selection committee this year. There were two co-editors for each of four genres:  Mark Kelly and Carole McMillan for fiction; Linda Heath and Jada Rufo for nonfiction; Laura Burkhart and Tamara Williams for poetry; and Richard Bodien and Joy Fisher for drama. In addition, there were two at-large editors, Duncan Dempster (who was also the master of online publishing magic) and Margaret Zacharias. And finally, Bob Lupo, managing editor of Latitudes, was the engineer who kept the train on the tracks until it rolled into the station on publishing day.

One last “fun fact”: there were a total of 76 submissions this year, four more than last year. Latitudes just keeps on growing.

Thanks are due all those who participated in this project, in whatever capacity. Our lives have been enriched by your efforts.

And just so you can visit the third edition of Latitudes easily to see the pictures of our authors and read their work if you haven’t already, here’s a direct link:
LitReview Third Edition - HAWAII WRITERS GUILD 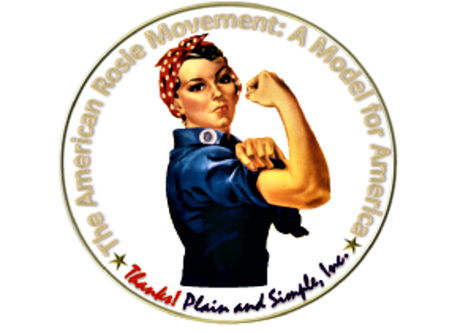 
​Most people have heard of “Rosie the Riveter”. But did you know she was the symbol for about 6 million women who aided in the war effort during World War II? Beginning in the early 2000s, Hawaii Writers Guild member Anne Montague made it her purpose in life to write about some of these “Rosies”.

The first “Rosie” Anne knew was her mother. Her mother wasn’t a riveter—Rosies worked in many different capacities on the home front. Anne’s mother inspected lenses that turned out to be for gun sights. Anne, born in 1939, was a child at the time, and her mother didn’t want to tell her that the lenses she inspected were for guns, but Anne knew her mother worked at the “war factory” in town.

During the war, Anne, her mother and her sister lived with her grandmother in Huntington, West Virginia. When Anne turned six in 1945, the war had just ended. Anne remembers that, on her first day of school, her grandmother walked her to the gate and told her: “Anne, you are lucky. You are growing up in a free country and you are going to be able to get an education.”

“She made me promise that I would use that freedom wisely,” Anne recalled. Although she married young and moved away from West Virginia, when Anne later divorced and moved back to her home state in 2002, she remembered that promise. At first, she thought she might do a project commemorating mothers, but then she remembered her mother’s job as a Rosie and decided to do a project about the Rosies.

In 2008, Anne interviewed her first Rosie, a woman named Garnet. Garnet actually had worked on airplanes as a riveter. While Garnet was riveting new airplanes, first in Michigan, then in California, her fiance was in France repairing those same planes. They were married after the war. When Anne left that first interview, she was so touched by the story she had heard, she made it her goal to find 14 Rosies to interview.

On March 29, 2009, a West Virginia newspaper ran an ad: “Help us find a Rosie.” The first woman to respond was a woman named Nancy Sipple, who had inspected airplane parts in Cincinnati, Ohio. Nancy wasn’t the only Rosie to respond. Within days, Anne had reached her goal of 14 Rosies, but responses kept coming in.

Since then, Anne estimates she has done between 150 and 200 Rosie interviews, writing bios to commemorate the lives of these women.

But even in 2009, Anne began to realize she wanted something more permanent than stories in a newspaper for her Rosies. She saw how well they got along, no matter how diverse they were, and encouraged them to pick a project that they could do together.

The project that first group of Rosies decided on was a park-within-a-park. They approached  city officials in St, Albans, West Virginia to ask for space within an existing park called Roadside Park for a dedicated Rosie the Riveter site. The city agreed and offered them a site near the toilets “to make it easier for women to go to the bathroom.” The Rosies were not amused.

They countered by asking for a site they favored near the river, but were told the state owned that land. Nancy Sipple did some research, however, and discovered that the city did hold title to that land. When she confronted the city representative, handing him a copy of the deed, he conceded the point and asked: “Where do you want the first tree planted?” Nancy pointed to a spot and the project began.

The Rosies picked a dogwood tree for the site for many reasons, Anne recalled, including that they thought dogwood trees are “both beautiful and enduring—like women!” Other improvements were also installed and the Rosie the Riveter parksite was opened in 2012. “Unfortunately, Nancy Sipple died shortly before the dedication ceremony,” Anne said. 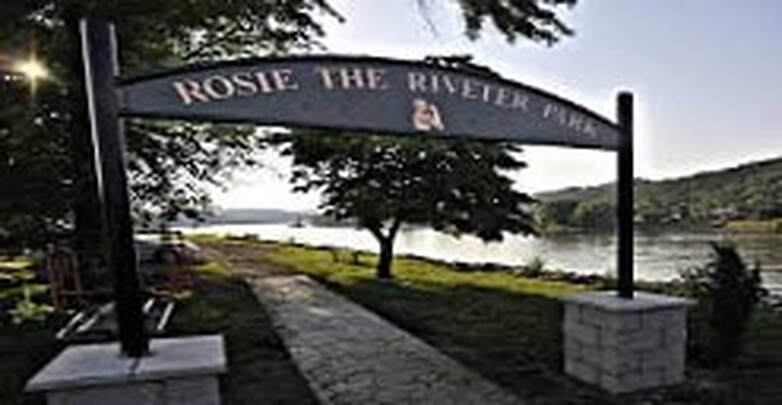 By 2012, Anne’s work with Rosies and many partners had also begun to morph into a movement. That year, NBC contacted Anne about a Today show they wanted to produce on Rosies. They were looking for a factory setting they could use to stage the show. Did Anne know of one? She didn’t, but she knew who to ask, and within minutes she had located the perfect space. By then called the Stamping Plant, during WWII it had been the old Naval Ordinance Center in South Charleston, West Virginia. NBC secured the site for the show and many Rosies from several states were gathered together to reminisce about their experiences during the war. Here’s a link to that NBC Today show:

​Since 2012, Anne has been involved in 18 Rosie projects in such places as Brunswick, Maryland, Camden, South Carolina and Washington, D.C. Each project has its own theme chosen by the Rosies from that area. In one location, bluebird nest boxes have been installed because, Anne said, “bluebirds represent hope to Rosies.” In another location, a mural has been painted on the side of a building.
​
Anne would love to see a Rosie project come to fruition in Hawaii. She has heard that some Rosies are still alive in Hawaii, but she hasn’t managed to find them yet. Anne recognizes that time is running out. Most Rosies still alive are around 93 years old by now. Anne herself is already 82. She could use some help—especially from writers. Anyone interested in helping Anne with this project can contact her at team@americanrosiemovement.org. 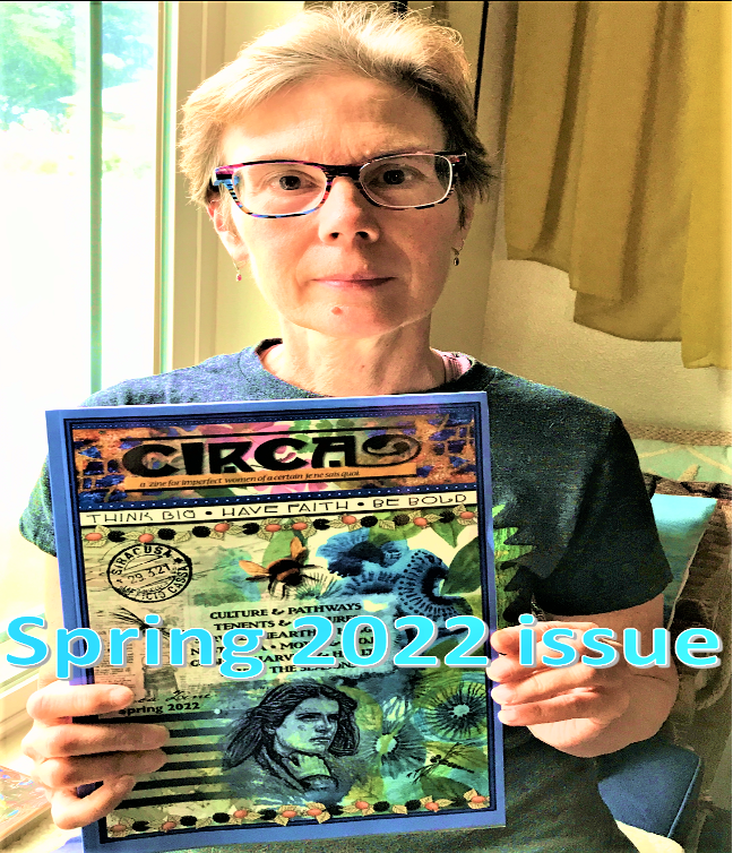 Circe Woessner holds a copy of the Spring 2022 issue of Circa
Circe Olson Woessner, a brand-new member of Hawaii Writers Guild, and some of her friends have launched a quarterly print zine at a time when print media is perceived to be on the decline.

The idea for a print zine came to Woessner during the pandemic. Trying to stay creative and positive while vitriol and angst swirled on social media, she invited some of her writer friends to collaborate on the project. They all agreed that it was a perfect time to launch something positive into the universe. A casual, home-made publication seemed to be the perfect medium.

The resulting publication, Circa, is more than a “casual” magazine, though. Its richly-illustrated, engaging content crammed into 46 pages is reminiscent of an illuminated manuscript or mini coffee table book. Its colors leap off the page and its A4 size makes it satisfying to hold. Each issue has a beautiful print suitable for framing on the inside back cover. Because of Circa’s literary feel, Woessner often refers to it as a “salon between covers.”

Circa’s tagline is “a zine for imperfect women with a certain je ne sais quoi.” Editor Woessner says “We’re not peddling perfection, we’re embracing authenticity, celebrating that we all get along despite our differences and world views. Our goal is to create an amazingly beautiful zine with rich content and we’ve accomplished that.” 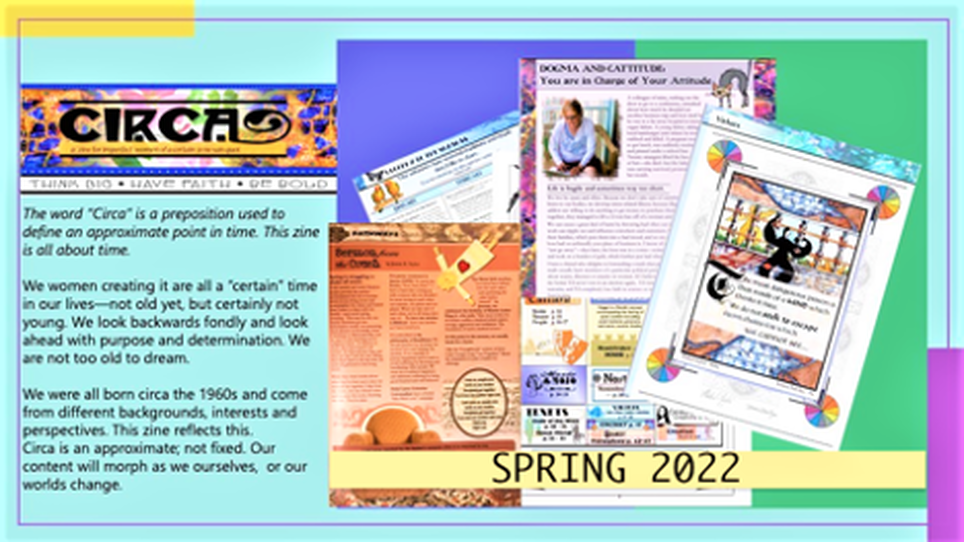 Both the title of the magazine and the chosen topics embody strongly-held ideas.

Circa is written “by friends for friends” and consists of topics that each of the contributors feels very strongly about. “It’s an eclectic mix of writings on the American Southwest, urban wild crafting, the changing seasons, raising children, spirituality and religion, books, culture, and interviews with poets, authors, artists and actors,” Woessner reports.

Healing is a recurring theme for the Circa writers. They all have clinical or education backgrounds in psychology, medicine, counseling and teaching. They believe in the curative powers of art, music and writing.

Art editor Barbara Beck-Azar explains. “Engaging in graphic design takes me to a space where my troubles disappear. My inner creativity dissolves grief and weariness as I blend words and ideas into beautiful designs. In art, I can engage in silent silliness and the noise of the world dissipates. It’s in these moments I experience a holistic sense of well-being, even healing.”

None of the Circa team had experience building a magazine from the ground floor and they agree it has been an interesting process. “We live all over the country, so everything is done remotely. We try to meet weekly via Zoom to brainstorm, hash out details and figure out next steps.”

“We self-publish so we keep all the control, but that means we own all the mistakes, too,” Woessner acknowledged. “Because it’s print-on-demand through Lulu.com, we don’t incur big upfront expenses,” she added.  “Just like giving birth, it’s been hard, exciting and ultimately rewarding,” Preliminary feedback from readers has been positive.

Circa’s spring issue debuted in late December and its summer issue will print on April 1st. Circa can be ordered here. For more information about the zine or to contribute a guest article, contact Circinkt@comcast.net.