Signs of Life after COVID-19:
Live Public Readings Start Up Again and Guild Members are There!

It was the day before Valentine’s Day, 2020. Writers’ Voices, Hawaii Writers Guild’s monthly Waimea public reading event held its first reading in its new venue at Tutu’s House in Waimea. We were looking forward to more such events. Then COVID-19 shut us down.

Ditto for the public readings staged by the North Kohala writers and those put on by the Volcano Writers Group. One of HWG’s main methods of sharing our members’ writing with the public suddenly went silent, a victim of the pandemic and the Governor’s resulting “shelter in place” rules.

It wasn’t long before North Kohala Director Eila Algood and then-HWG president Diann Wilson put their enterprising minds together. Diann obtained a free YouTube channel thanks to our brand-new status as a tax-exempt 501(c)(3) nonprofit organization, and both women began producing videos to replace the live readings and workshops we had previously made available to the public.

Algood’s program, Inside the Writers Studio, in particular, established a venue where our members were invited to read their work and then talk about their writing in conversation with Algood. It didn’t have the same dynamic as a live reading by several writers, but the videos, posted on our YouTube channel, had greater range: they could reach anyone, anywhere, who had access to a computer.

The resiliency of these two women allowed Hawaii Writers Guild to continue its mission to bring literary work to the public, and we will be forever grateful to Eila Algood and Diann Wilson for their quick response to drastically changed circumstances.
…

Fast-forward to 2022. Life stirs anew in Springtime, they say, and so it seems appropriate that an Earth Day Celebration breathed life into live performance after the long shut-down resulting from the COVID-19 pandemic. The Earth Day Celebration, held at the Kohala Artists Co-operative in North Kohala on April 22, included dance troupes, singing and spoken word performances, a puppet show, jazz, chanting and poetry, and ended with an open dance party.

And our members were among the presenters! Three of the five performers in the Spoken and Sung Words portion of the Celebration were members of Hawaii Writers Guild from North Kohala. According to the program, Donna Maltz read excerpts from her book; Carla Aleili read her “Tale of a Snake Dancer,” and Virginia Fortner was slated to do a reading and song sharing.
…

In May, after a two-year-plus hiatus of its own live reading series, Words and Wine, Kona Stories bookstore in the Keauhou Shopping Center announced it would hold its first live Words and Wine event at its store on May 3.

This event traditionally took place on the first Tuesday evening of the month starting at 6 p.m. Authors were available to talk story while members of the audience got their plates of appetizers and glasses of complimentary wine. Authors then gave a 15-minute talk about their book and themselves, the writing and publishing process or a short reading from the book. After all the authors presentations, there was time for individual questions and book signings with the authors. Two or three authors attended each month and the evening usually wrapped up around 8 p.m.
​
Three authors were scheduled to read on May 3, 2022. Two of them, Lucy L. Jones and Tessa Rice, were members of Hawaii Writers Guild. Moreover, Tessa Rice had been a student of Dr. Jones at Hawaii Community College. Now they would present their respective writings as equals before an eager audience of book lovers.
Dr. Jones [see her profile in New Member Spotlight elsewhere in this issue] read from her book Feral Fables, stories of transformation that offer a unique approach to self-healiing. Tessa Rice read from her first published novel, Eternus:Adeo the first book of a science-fiction trilogy set in the former United States, circa 2300 A.D. [See more about her new book in our Recently Published stories]. Congratulations, Lucy and Tessa!
…

In July our new member, Gwyndolyn Gorg left the state to be a featured speaker at a live reading. [And, yes, you can read more about her in her profile in New Member Spotlight elsewhere in this issue.]

Gwyn, as she likes to be called, lives in Waimea now, but she has lots of friends and fans in the Los Angeles area where she once lived.  On Friday, July 22, 2022, Gwyn presented an evening of “Poetry & Prose with Gwyn” with musical accompaniment by Martin Yarborough, at the Lula Washington Dance Studio on Crenshaw Blvd.

Here’s a poster from her event: 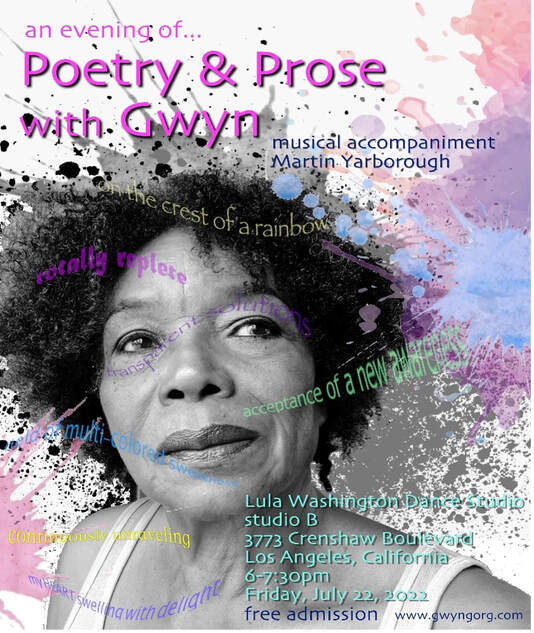 Gwyn is back on the Big Island now and, energized by her experience in Los Angeles, plans to do a reading here in Waimea. She is hunting for just the right venue, so stayed tuned!

Remember the story in our very first issue about the Volcano Writers Group publishing a book together? They started work on it in the Summer of 2019 and the final version was finally published in August 2020, long after COVID-19 had shut everything down. That frustrated their planned book launch, an in-person reading.

That set-back didn’t end their enthusiasm for cooperative book projects, though. Yep, they’ve published another book together—and this time they are determined to have a live public reading to introduce the book to the world. The new book is called Out of Our Minds, vol. 2: Shadows and Reflections. It’s worth mentioning that when they first started considering their second book project, they were thinking about calling it Out of Our Minds: Laughter from the Mist, but—you know—the pandemic.

“We picked the title to echo what people were going through during the two years of the pandemic,” said Bryan Furer, a member of the Board of Directors of Hawaii Writers Guild as the director representing the Volcano area. “It doesn’t have pandemic stories in it, but it catches the mood of the time,” he explained.

Like their first book, this one was published through Amazon Kindle Direct Publishing with technical aspects helmed by Volcano Writers Group member Rick Frazier. Authors had more power over the creative design of their own section this time, according to Furer, “but I think, if we do another book, the creative design will be more uniform,” he said. “It will help expedite the editing and layout.”

The group continued to meet in person throughout the process but, as a concession to the pandemic, wore masks. They met outdoors at Ira Ono’s Volcano Garden Arts and Café, their regular meeting place. “Some people were frustrated at times,” Furer admitted. Despite the precautions they took, sometimes people got sick, and that slowed down the process. “Janet [Carpenter, a long-time member of the group] was inspirational as far as encouraging people to get the project done,” said Furer.

As promised, there are more contributors to this book than to their first book, 12 in all compared with eight the first time. “It includes some new authors who just joined us recently,” Furer said. In addition, one or two of the old contributors have moved away. Furer is expecting around six authors to take part in the live public reading.