Aloha mai kākou! My writing is my escape and solace, imagining different worlds in which people interact with the speculative kernels from our latest discoveries in science and advancements in technology.
I became hooked on science after Neil Armstrong took an unusual stroll one Sunday morning in July, 1969. As a boy, I devoured all types of science fiction novels from Isaac Asimov, Arthur C. Clarke, and Frank Herbert. While serving as a Nuclear Engineer of various U.S. submarines, my reading turned to the hard SciFi genre written by the likes of Kim Stanley Robinson and Ben Bova. After leaving the Navy, I went back to school and earned two master's degrees, one at Bryant University in Rhode Island and another at Swinburne University in Australia, I spent the next couple decades teaching college physics and astronomy.  While a flight instructor, I published a column on flying in Hawaii in PilotMag, an aviation enthusiast’s magazine. My debut novel, Mauna Kea Rising, came out in 2019. ​
Learn more about me at my website. 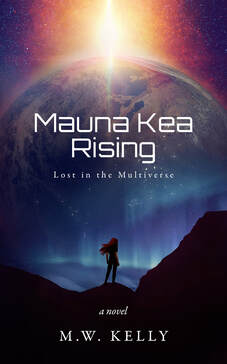 Description of Mauna Kea Rising Lost in the multiverse, Hellen Callahan is an unemployed, single mother trying to steer her son into adulthood. It’s the summer of 2025, in a parallel universe where the British Hawaiian Islands sit between rival superpowers, Britain and Japan. Hellen only wants to take her son on a sailing voyage to Hawaii in hopes of recapturing the bond they once shared. Isolated on the high seas, the crew of four is oblivious of a catastrophic solar flare. Throughout the Pacific, power grids fail. Cities plunge into darkness. Seamlessly merging mind-bending questions with high drama, Mauna Kea Rising is the first book in a new science fiction series. Science, Buddhism and romance converge in this intense adventure in the multiverse.