​
This morning, the sound was frantic, distraught, disturbed.  My ears and senses tuned into this familiar voice like a magnet. Tom! What is happening to you? I ran to the front deck of the house scanning the lawn below. I could see my beautiful wild turkey across the road in the neighbor’s yard, pacing back and forth along their wire fence, gobbling loudly, obviously very upset. It was early morning, so I threw on my heavy black bathrobe and ran down the long driveway, crossed the street, and approached the neighbor’s fence.

Tom stuck his head into the openings in the fence, unsuccessfully trying to ram his large body against the wire. Finding that he couldn’t force himself through, he pulled his head back and gobbled loudly, unable to get out. Recently, I had seen him and Lady, his female companion, walking through this neighbor’s yard by using the gateless driveway at the far end of the fence. Tom would usually follow me when I called his name, but this morning, his mind was not functioning.

“Tom, you can get out if you go to the driveway!” He would follow me a few yards, then turn around and run to the corner of the property facing my house. I shouted again, and he’d come, but within twenty feet or so, he’d turn and run back, all the while gobbling pitifully. After several more tries, he was too frightened and agitated to pay attention. I briefly wondered if this was the same bird that had been at my house for months, a proud and commanding turkey who paraded and guarded his territory like a superb watch dog. I always believed that he was intelligent and curious, never dumb or mindless. I worried that the neighbors would be upset with all the noise, maybe even vowing to shoot him. A mature male turkey’s gobble can be heard a mile away according to experts.

Tom and Lady appeared at my home a year and a half ago. I had never observed wild turkeys before, and I admired their beauty and caring companionship. They were tall and lean, the male slightly larger. Wild turkeys are the largest birds living in Hawaii, brought to the islands in the early 1800s as food. The pair arrived each morning by ducking under a wire fence near my lanai to spend the day scratching the grass for worms, grubs, and vegetation. They were never far apart while walking along the perimeter of the property, often looking at each other as if in conversation. During the hot days of summer, the two crouched under the trees in the back yard for hours. After a month of daily visits, I researched and ordered organic cracked corn, apparently a favorite in their diet, which I augmented with organic oats. They seemed grateful to have a big handful served on the patio each morning.

Curious about their anatomy, I discovered that turkeys have a snood, a fleshy, knobby, pointy flap of skin on top of the beak. The female’s snood is small, but the males can grow one quite large and floppy. Tom could fling his around in circles or retract it into a red cone on top of his beak. Both turkeys had thin, flexible skin at their throats called wattles. The males have beads of flesh at the base of their featherless neck called caruncles, that looked like a necklace. Lady’s head always seemed a light blue or gray, but Tom’s cranium was quite brilliant, turning from blood-red to blue to white depending on temperament, I guess, and with small pink bumps protruding on his head and down the back of his neck. Male turkeys grow spurs on their legs, the length determining their age. Tom didn’t have any, so I figured he was young. He also didn’t have a “beard,” a set of feathers that protrude from the chest, another indication that he was a youngster.

Several months after their arrival, both turkeys grew considerably. Tom would display his tail feathers in a large fan, his wing feathers iridescent and ranging in color from glorious browns to rusts and reds, and spreading wingtips that looked like a grey checkerboard. Males have more than 6,000 feathers on their bodies. He strutted around the yard looking both magnificent and formidable. He seemed territorial, gobbling loudly if anyone drove up the driveway or chasing away the white egrets who liked to eat the worms after the lawn was mowed. He and Lady followed me around the yard as I picked up limes and oranges and an occasional tail or wing feather that was left behind in the grass.

As November approached, I became worried that someone might look at Tom and think he’d make a nice roast turkey for Thanksgiving. But I learned from friends that wild turkeys are not hunted nor eaten because of the tough meat. I was relieved.

As the frantic bird continued pacing the fence, I almost gave up hope. I knew he could fly even though turkeys prefer to run. I’d seen him glide to and from a roosting branch in the ironwood tree behind the house. I decided to make one last-ditch effort to get him out. Once again, he followed me along the fence and stopped. I shouted, “Tom, fly! Fly!” as I made sweeping wing movements with my arms. He looked at me and then began flapping his great wings. He gently lifted off the ground then soared over the fence, over my head, across the road, and landed half-way up the lawn where he ran to Lady, still waiting. The two quickly disappeared behind the shrubs.
​
Marveling at the powerful wings that could carry a twenty-pound bird effortlessly through the air, I ran home, huffing along the steep driveway. I went directly to my office where I found two hungry turkeys at the lanai, ready for breakfast.
​ 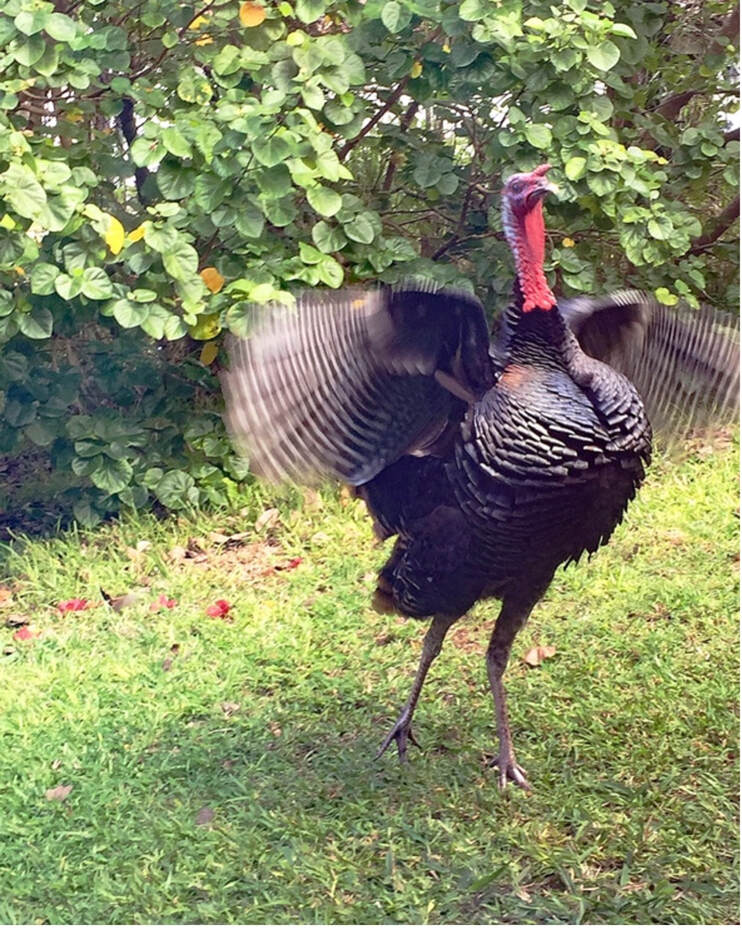