My Escape From Alcatraz 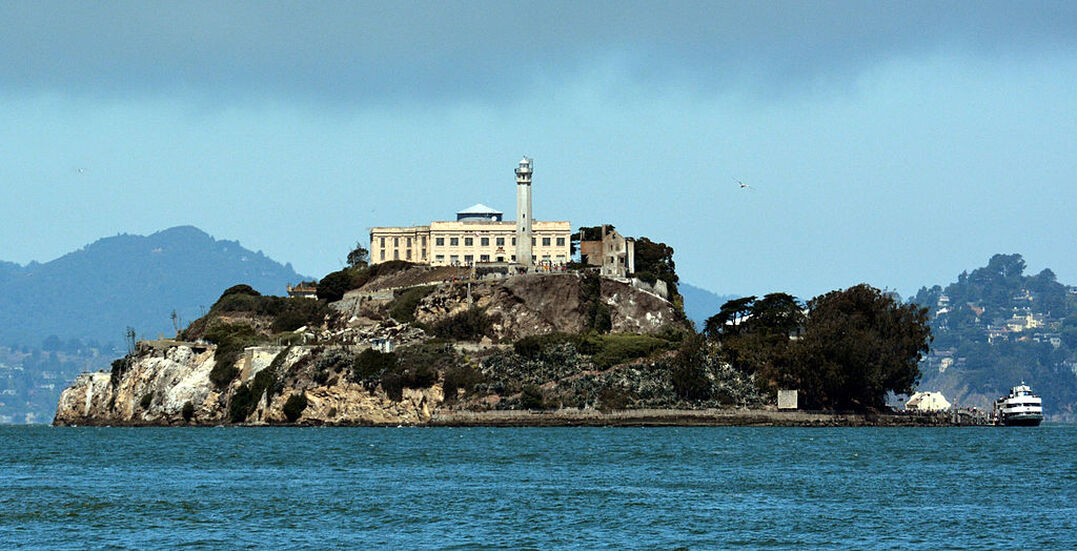 I was only on Alcatraz Island once and it wasn’t off a tour boat and it wasn’t to compete in the Escape from Alcatraz Triathlon. And no, in case my grandchildren are reading this, I didn’t do time there when it was a prison from 1934 to 1963, or play a prisoner in any of the Alcatraz movies. My trip happened back in the late spring of ’71 when the American Indians were occupying The Rock, as they liked to call it. Here’s a quick review:

In November of 1969 three boats took members of twenty tribes from all over the country to occupy Alcatraz, reclaiming it as “Indian land and demanding fairness and respect for Indian Peoples.” The spokesman for the Indians was a Mohawk from New York named Richard Oakes, who offered the U.S. Government “$24 in glass beads and red cloth.” Oakes said, “We hold The Rock,” and that became the movement’s motto.

Grace Thorpe, daughter of Jim Thorpe, the first Native American to win Olympic gold (1912), was one of the occupiers who helped convince celebs like Jane Fonda, Anthony Quinn, Marlon Brando, Jonathan Winters, Buffy Sainte-Marie, and Dick Gregory to visit the Island to show their support. Creedence Clearwater Revival gave $15,000 for a boat they named Clearwater for more reliable transport.
Tragically, a few months later Oakes’ 13-year-old daughter fell from a three-story structure in the prison and died. He and his wife left the Island shortly after, as did many others during the 18-month occupation.

By the spring of ’71 most occupiers were gone and many that were left wanted off, too. There had been numerous power struggles among the various tribes almost from the beginning, and the fact that they lasted 18 months seemed victory enough, although Uncle Sam said, if I may paraphrase, Sorry Injuns, but Alcatraz is not yours to reclaim, so beat it!

I knew the protest had waned over the months, as many original occupiers were students who went back to school or those with jobs and a real life had to get back to their routines, leaving mostly drunks and homeless hippies on the Island. But they needed supplies, and they needed a boat. I don’t know what happened to the Clearwater. I never saw it in Sausalito. I’d occasionally see a few Indians hanging out at the Gates looking for someone to take them out to the Island, and a few sympathetic locals did, but mostly just to get them out of the neighborhood.

Then one day my friend Jack asked me if I’d like to make $100.  A hundred bucks back then was good money. I had been working part-time at the local bookstore for $2 an hour, so $100 to me was the equivalent of 50 hours of work! “Hell yeah,” I replied.

He told me the U.S. government had cut off all electrical power and phone service to the Island, so the remaining occupiers had cut and stripped the prison of copper wire, which had gone up to $1 a pound, and they needed a boat to bring it to shore.

Jack had a tugboat called the No.1 and he knew I had recently purchased a 30-foot steel lifeboat from a guy who claimed he had an epileptic seizure on the boat and refused to spend another night aboard. He just wanted to get the hell out of there, and I happened to be the first person he met when coming to shore, so he sold it to me cheap, right on the spot, then tossed his back pack on his shoulder and split. I never saw him again.

I knew what we planned to do was a federal crime, but it didn’t really bother me. What could happen? So, within a few days Jack fired up his ancient one-cylinder diesel engine (chug-a-chug-a-chug) and we towed my lifeboat out to the Island. As we approached the dock we saw a small group of occupiers that had gathered to help load the wire onto my lifeboat. The wire was cut into six to eight foot lengths, coiled with an overhand knot to make for easy handling, and piled on the dock.

Jack and I watched as they loaded the wire, but pretty soon I could see that there was more wire than seemed safe to take, as the gunnels were already within a few feet from the waterline. Just then I heard Jack behind me talking loudly to someone. I turned around and looked into the No.1 to see eight or nine Indians down in the hold, and they wouldn’t come out. They wanted to get to shore in a bad way.

Then we noticed the others were still loading the remaining wire, and Jack looked at me and said, “It’s time to go.”

While he fired up the diesel, I went to tell them, “Enough!” I undid the lines and pushed off, then jumped on board.

It didn’t seem like the No.1 could pull this load, but Jack was cool, and went full-throttle as soon as we were out in the clear, chuckling at his tug’s slow response to inch forward, fighting the current, the wind, and the loaded lifeboat. Besides us and the stowaways, we had a few more last-minute invited passengers. I remember asking him if he had any lifejackets and he held up two fingers and pointed down in the hold where two of the stowaways were now wearing life jackets.

About half-way to Sausalito we noticed a Coast Guard vessel going incredibly fast with all but the keel out of the water! It wasn’t your typical Coast Guard cutter, but an experimental jet-boat of some kind, and I never saw another one like it. This, of course, made us both a little nervous, worried that they might decide to check us out, but no, they had better things to do. We eventually made it back to Waldo Point, pulling in as close to the Ark parking lot as possible.

As soon as we got to shore all our passengers piled out and headed to the Bait Shop for food and drink, and since the truck that was supposed to be waiting to haul the copper to recycling had not yet arrived, to make a few phone calls. As we watched them walk away, Jack looked at me with his wry smile and kicked a few of the wire bundles overboard.

So now the white man is once again ripping off the American Indian, and this time I’m guilty by association.
​
Over the next hour, while waiting for the truck, observing these guys put away a good amount of booze, and watching the waterline drop, as the tide was now going out, I noticed some wire poking above the surface just off the stern, visible to anyone looking hard enough. It was about that time the truck showed up and the wire was loaded. Luckily the extra wire went unnoticed and Jack went to get our money, while I felt relieved that we didn’t start another Indian uprising.

POSTSCRIPT:  It was just a few weeks later on June 11 that the remaining fifteen occupiers were forcibly removed by the U.S. government.
JIM GIBBONS.   In 1969 Jim dropped out of the University of Wisconsin in his final semester before getting his B.A. degree in English Lit, and headed for San Francisco.
Jim became one of the local anchor-outs, aka “water squatters,” living free along the Sausalito waterfront on a 22-foot lifeboat he rigged up and sailed around the San Francisco Bay and beyond. Jim’s memories of meeting local celebs like Shel Silverstein, Alan Watts, and Spike Africa are just a few of the stories included in his recent book, Flashbacks: A Memoir of his life during the era of sex, drugs, and rock 'n’ roll. My Escape From Alcatraz was submitted to the first issue of Latitudes partly because of the local protest against the TMT (Thirty Meter Telescope) being built on Mauna Kea.  (Jim, FYI, is for the TMT being built.) Jim’s story took place in November of 1969 when three boats took members of twenty tribes from all over the country to occupy Alcatraz, reclaiming the defunct prison as “Indian land,” and offering the U.S.Government “$24 in glass beads and red cloth.” After eighteen months of occupation the U.S.Government cut off the electricity to the Island...and the rest is history, with Gibbons’ story a part that very few people know.